Poverty stricken families in the project regions are provided a nutritious kit every month as part of the 'Annadaanam' programme, where we identify those who are unable to acquire atleast one square meal. We also organise get- togethers once in a while for the group.

The World Bank –assisted “Kerala Rural Water Supply and Sanitation Project” better known as “Jalanidhi”, has been implemented at Thekkumkara, Madakkathara & Nadathara panchayaths by KESS, which helped successfully tackle the water scarcity in the community house holds. Intervention include providing under ground pipe connection facilities to the beneficiaries, facilitating repair and restoration of damaged pipes,provision of water and maintenance of the water sources.

As part of bringing safe drinking water to those deprived of it, KESS collaborated with like minded agencies to source water purifiers to our beneficiaries who were troubled with non availability of impure drinking water.

The Chavara mission region at Amalner in Maharashtra, has been taking care of Chavara Ashramshala- the poor tribal boys’ orphanage and school, which has helped many poor children to become professionals in medicine, engineering etc, over the years. But the severe water scarcity has been a crisis to acquire water to meet the needs of the children, let alone to drink. The little water they had were being shared among the poverty stricken villagers as well. KESS has been able to bring in a water conservation project to facilitate a natural water pit, as well as open and bore wells in this area. This support has come at a right time paving way to conserving water in a sustainable way.

A home of one's own is a dream come true for everybody. Acquiring and maintaining one is not always possible, especially for those who can barely have a square meal of their own. KESS has been supporting those who require financial assistance in house construction, refurbishment of dilapidated homes, toilet and sanitation works, extension of rooms. The Bhavanamitra project has a people's participatory approach to it. Beneficiaries are equal participants in achieving their dream house. Their monthly savings are deposited to which KESS adds a certain percentage and supports them during each stage of construction. KESS has also been actively mobilizing funds for building homes for the selective needy , all over the state.

For the poor landless, KESS reached out to them and distributed land so they can build up their safe heaven of shelter. 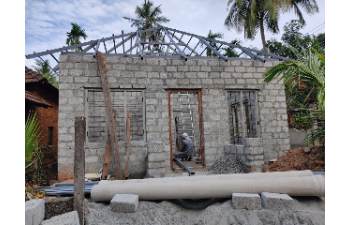 Your browser is out of date!

For a better experience, keep your browser up to date. Check here for latest versions.